If you’re into camping, hiking, or spending time at the beach, you’ve probably seen people using solar power banks to keep their devices charged up. But what is a solar power bank, and how do they work?

A solar power bank is a small external battery that collects and stores energy from the sun. This energy can then be used to charge electronic devices, like smartphones and tablets. It’s an affordable and reliable power source for your gadgets when on the go.

Truth be told, if you’re planning on spending any significant amount of time outdoors, then a solar power bank is an essential piece of the gear. These handy devices allow you to recharge your electronic devices using the power of the sun, and also are incredibly lightweight and portable.

Besides, no one wants to be caught without a backup plan. Having a power bank with you when you are spending time outdoors is essential, just in case your phone runs out of juice. Especially if you’re planning to be out all day. You never know when your battery is going to run low.

When shopping for a solar power bank, you will want to pay close attention to how much energy the power bank can hold. As an example, the higher the battery capacity number the more power it can store when fully charged.

It’s important to know that battery bank storage capacity is typically measured in mAh or “milliamp-hours.” Additionally, solar battery banks are available in Lithium, Manganese, and Polymer battery composition. Lithium is the popular choice among most that depend on power banks for on the go power.

However, one of the biggest decisions you’ll make when shopping for a solar battery bank is how much power you need to store. Solar battery banks come in a variety of capacities, so it really depends on your needs.

Battery capacity for solar power banks tend to range anywhere from 1,000 mAh to a whopping 38,800 mAh! But when shopping, also consider other factors such as warranty, price, reviews and how often you’ll be using it.

Let’s dive into the details of how a solar battery bank works. Then, we’ll explore some of the advantages and disadvantages of using one.

So, if you’re interested in learning more about this handy gadget, keep reading!

How Does The Solar Power Bank Work?

As a result, the electric field causes electrons to move around within the cells. The rays from the sun are then absorbed into the solar cells. This causes the photons from the sun to strike the electrons in the circuit, which then knocks it out where it’s collected by a conductive plate to create electricity.

This process can often takes hours, but will fully recharge the internal power bank battery. Then simply connect the device you need charged to the power bank using the appropriate cables and it will begin drawing power from the power bank.

Advantages of a Solar Power Bank

Solar power banks have many benefits. Perhaps the most obvious advantage is that it is a great way to keep your devices charged while on the go. You’ll never have to worry about being stuck with a dead battery.

They are also small and light, so they are easy to carry with you. With no need for cords or outlets, these handy little devices are easy to tuck away until needed.

If you are planning on spending any time outside in the heat and need to use your phone, a solar power bank should be essential part of your gear. Because when it comes to your phone battery, heat is the enemy. Prolonged exposure to high temperatures can do some serious damage, draining your battery faster than usual. The reason for this is that heat waves impair a battery’s ability to stay cool.

As the name implies, a solar power bank relies on sunlight to capture solar energy effectively. Simply put, sunlight is essential to the function of solar power banks. Without it, they wouldn’t be able to store energy for later use.

And while it is true solar energy can still be collected during cloudy or rainy days, the efficiency of the solar system drops tremendously.

But it’s important to keep in mind that, the intended use for the solar charging feature is for emergencies only. Majority of the time, the solar power bank will be fully charged from a wall outlet prior to heading out into nature. The solar feature is a good way to maintain the battery charge.

Solar power bank charging times can vary depending on the size of the power bank and the strength of the sun. However, most solar manufacturers recommend using an outlet as the primary charging method. Then using the sun to maintain charge levels as a secondary method.

When using a wall outlet, it will take roughly 6 to 7 hours to fully charge. If using the sun only, depending on size of the battery bank it can take upwards of 30-50 hours or more! However, charging via the sun is not recommended as the primary charge source.

Simple fact is, it’s always best to use a wall outlet to charge your battery bank before heading out on your outdoor adventures. That way, you’re guaranteed to get a full charge.

So by now hopefully I have answered the question “what is a solar power bank” adequately enough. Let’s dive into some common FAQs.

How Long Does A Solar Power Bank Take to Fully Charge?

If using direct sunlight only, it will take roughly 50 hours to charge the battery on a standard (25,000mAh) power solar bank fully. However, the recommended method of charge is a wall outlet, which will take about 6-7 hours.

How Do You Charge A Device Using Solar Battery Bank?

By connecting the USB end of your charger cable to the power bank, and then inserting the other end into your device. Most power banks have USB ports for charging on the front of the solar power bank.

Can a Portable Solar Power Bank be Charged With a Computer?

Yes, solar power banks can be charged by plugging them into a power source such as a computer or laptop.

Does a Solar Power Bank Continue to Charge Once Full?

No, after the power bank battery is fully charged it cuts off the charging through the solar system completely. This helps maintain the life of the battery.

How Long Does it Take For A Solar Power Bank to Charge a Phone?

From my personal experience, it takes a solar 26800mAh power bank about an hour to charge my iPhone 12. Granted, the iPhone wasn’t completely drained, but close to it!

Final Thoughts: What Is A Solar Power Bank

Solar power banks are a great way to keep your devices charged up while you’re out and about, especially during the summer when the sun is shining bright. If you haven’t tried one before, we highly recommend picking one up – they could come in handy on your next outdoor adventure!

Just remember to charge up the power bank fully before you head out on your outdoor adventure. Then use the suns energy to keep the power bank charged. Think of the solar panel as more of a bonus feature. 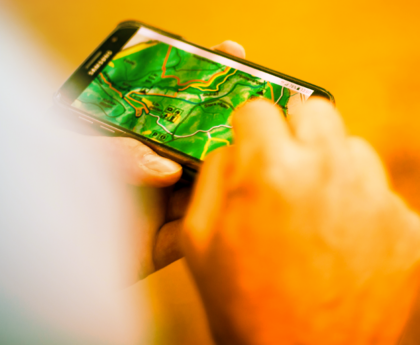